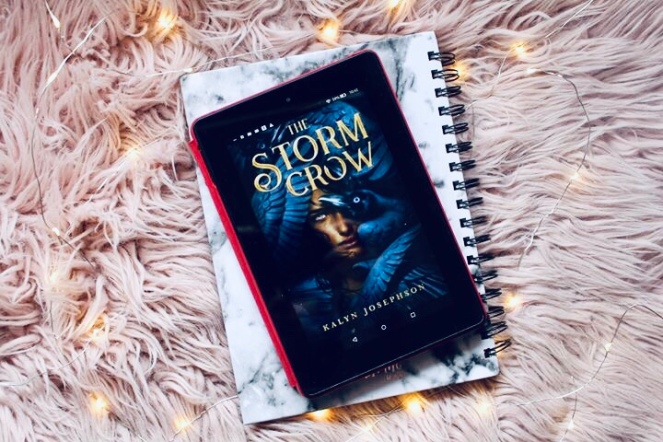 ARC provided by the publisher via Edelweiss in exchange for an honest review.

I really LOVED this book! The Storm Crow is filled with the potential to be a great, captivating series. It’s gripping within the first chapter, the characters are all amazing and the magic is uniquely written. With a large variety of majestic crows that can control the elements they provide everything needed for it’s country.  The crows gave me major  How to Train your Dragon vibes. Josephson has created such a rich and gorgeous world!

“It’s difficult to walk against the wind. It takes strength.”

The story begins in Rhodaire,a magical kingdom where the elemental crows reside. Everything happens so quickly in the first chapter,Rhodaire is attacked by Illucia during the crow hatching festival. The queen,some other residents and the crows are killed and the kingdom is left in ruins. The crows being gone changes everything as the residents relied on them for their way of life, the kingdoms continues to suffer. Enter our protagonist Anthia, princess of Rhodaire, when her sister announces she is to marry the prince of the kingdom who destroyed them she is desperate to escape. As luck would have it she finds a crow’s egg. When Thia and Ericen set off for Illicia  she takes Kiva along with her and the egg.

“A storm. A tempest of lightning and thunder with the kind of heart found only in legends. A heart full of kindness and courage and strength.”

Anthia “Thia” : She is the princess of Rhodaire described as having brown skin tone ,and a born crow rider.She suffers from depression, the way its written was so well done,I have never read a fantasy novel that talked about depression before.Josephson does not sugar coat how crippling depression can be. I love how she continue to strive to help her country and overcome her negative feelings. I related to Thia in many ways.I especially loved her connection and passion for the crows.To help create a truce between Rhodaire and Illucia Thia is to wed their Prince.

Kiva: Is Thia’s best friend,she is also a warrior who is assigned to protect the princess. Kiva and Thias friendship was everything! They have such love for each other, and their fierce loyalty. Kiva has also begun to develop a relationship with servant girl, I am anticipating such a cute romance in the sequel!

Ericen: Prince of Illucia, described as having pale skin, he is very sassy and reminds me a little of Rhysand which I’m so here for! I had a good feeling about him from the start even though he comes off as rude to Thia, I am cheering them on from the sidelines. I think there is more to him than we see right now.

Caylen: He is sweet and has some really cute moments, but I am not feeling him like I am Ericen. I felt like the romance between him and Thia was not necessary, but the author seems to be building up towards a long triangle.It honestly feels like she just fell for Caylus because he wasn’t an Illucian. It felt like he didn’t have much of a personality and  Ericen is clearly the better choice.

“People are their truest selves at their most desperate.”

This is the first fantasy I have read in a long time that had me completely immersed into the story and I flew through this book.  At times it was a little predictable but It was a great first book in a series. I highly recommend picking this book up when it comes out and I am very much looking forward to the sequel as I have a feeling it’s going to be amazing!