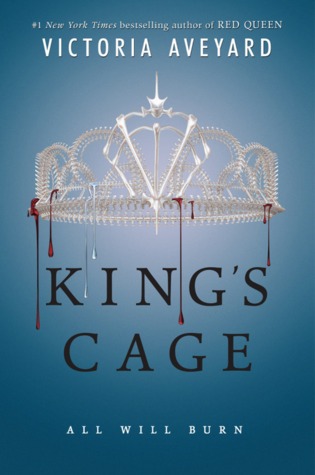 In this breathless third installment to Victoria Aveyard’s bestselling Red Queen series, allegiances are tested on every side. And when the Lightning Girl’s spark is gone, who will light the way for the rebellion?

Mare Barrow is a prisoner, powerless without her lightning, tormented by her lethal mistakes. She lives at the mercy of a boy she once loved, a boy made of lies and betrayal. Now a king, Maven Calore continues weaving his dead mother’s web in an attempt to maintain control over his country—and his prisoner.

As Mare bears the weight of Silent Stone in the palace, her once-ragtag band of newbloods and Reds continue organizing, training, and expanding. They prepare for war, no longer able to linger in the shadows. And Cal, the exiled prince with his own claim on Mare’s heart, will stop at nothing to bring her back.

When blood turns on blood, and ability on ability, there may be no one left to put out the fire—leaving Norta as Mare knows it to burn all the way down.

I’m finished FINALLY! I started reading the book in March and I was in a bit of a book slump also some personal stuff was going on with school. It just wasn’t the right time to read it so I put it down. I kept seeing it on my currently reading shelf and felt it was time to finish it. So here we are 9 months later.

King’s Cage was a really big disappointment and a huge let down from Glass Sword. Book one and two I loved them so much and had such high expectations for book three that I’m not sure what happened. I’m clearly not in the popular opinin of this book, which has 4 and 5 star ratings, but there was just something missing for me.

Let’s start off with the positives. I love how this book gave us more Maven which were honestly my favorite parts. I love this character this boy is flawed,broken and complex. He loves Mare and has a soft spot for her but he’s so twisted and cunning that he dose not even fully understand his own feelings.

Now the negatives. I didn’t like all the POV’S such as Cameron and Evangeline, I dn’t understand what there chapter’s contributed to the overall story. I felt like the book could have been shorter, it had unnecessary elements that added nothing to the movement of the plot line.

I’m excited for the final book, I hope it has what this book was missing.

One thought on “King’s Cage by Victoria Aveyard Review”