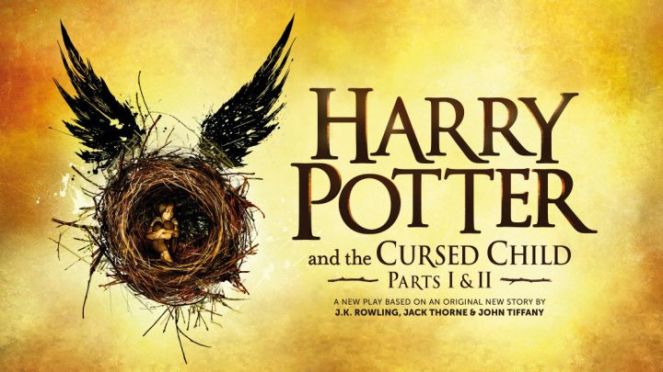 I’ve been waiting for this for months since they announced that the play would be written into book form. The cursed Child is currently in London, but hopefully will be in New York by 2017. For those of us who cant see it at least we can read it! I laughed and I cried and most of all LOVED so hard. I’m a barrel of conflicting emotions .It felt so exciting to be going back to the Harry Potter world, massive childhood nostalgia feelings right there. I get that there were too many plot holes, but it’s a Harry Potter story I couldn’t not love it,I’ve cried all the tears!! This is written as the script, its not an actual book. It’s set 19 years after the deathly hallows, it follows the story of Albus Potter.

I am 100% here for Draco’s redemption arc and Scorpius being a complete dork .I love Draco Malfoy so much more as an adult. I admire his love for his wife and his commitment to being a father. I really appreciated that they talked about Slytherin in a positive light. I loved reading about adult Harry and Draco interact. The duel they had in Harry’s kitchen was so great, Ginny comes back in and is “ What happened? “

Albus seems to be nothing like his father. He hates Hogwarts and has no friends besides Scorpius. He’s not athletic,he feels like a disappointment. Albus and Harry relationship was frustrating at times, I don’t think Albus understood that Harry never wanted the spotlight. He didn’t ask to be the chosen one. Harry is also at fault, by saying he wishes Albus wasn’t his son sometimes, Is very hurtful and surprising coming from Harry as he was abused and neglected as a child.It felt so out of character for Harry to say.

Scorpius is a precious adorably nerdy cinnamon roll. Who would have thought that Draco would raise such a beautiful nerd. Scorpius is the most snarky, loyal, realistic character ever and I adore this child. He loves to learn and follow the rules, reminds me of young Hermione.

Albus and Scorpius are precious cinnamon rolls that must be protected. The script has so much romantic subtext. I love displays of friendship and platonic love. Hug your friends, so much love between these boys.

Ron’s character only being there for comedic relief. He was so chill and Ron was never chill.Ron was one of my favorite characters and I feel like this was a let down to his character. He is more than just a joke.

Delphi I didn’t guess that she would be Voldermorts daughter. I don’t understand how reproducing with snake-man Voldermort is a thing and not a image I ever wish to see. Of course her mother is Bellatrix, because she’s creepily obsessed with Voldermort. And Delphi is an adult woman, she’s 22, so Bellatrix somehow had sex with this snake-man somewhere between book 6 and 7. Then gave birth just before the Battle of Hogwarts, they showed her so many times before the battle and there was no baby belly. I can’t visualize.

It’s heartbreaking that Harry watched his parents die because he knew he couldn’t go save them it would change the whole world. Albus holds Harry hand through it and it showed how there relationship was changing and they were beginning to accept each other as they are.

–Where is Hagrid?? He only appears at the end in a flashback. I need to see him interact with Albus and Scorpius.
–Neville: He is mentioned a few times but we don’t actually get to see him.I’m purely disappointed.
–Bellatrix: Gives birth just before Battle of Hogwarts? REALLY?? We see Bellatrix multiple times throughout the Deathly Hallows and I’m assuming the wizard pregnancy is the same as muggles, so how did she hide a baby belly for 9 months? Dis no one ever notice?
-It was strange that Hugo( Ron and Hermione other child) and Teddy weren’t in the story. In the epilogue of Deathly Hallows it says that Teddy comes around all the time. Yet he wasn’t even mentioned, I wanted to see him. To know if hes like Remus, is he a werewolf too?

I personally really enjoyed the humor in the play! Even though I tear up a few times and full out cried at the end when Harry watches his parents deaths and when Hagrids meets Harry for the first time as a baby. Oh the feels!! I REALLY want to see the live production.

It’s not perfect. It’s not a novel. It’s never going to be 100% exactly what we all wanted in an eighth story. But what it IS is a beautiful story about grief, fatherhood, acceptance, fear, trauma, and above all,love.I gave this book a 4.5 Stars.

10 thoughts on “Harry Potter and The Cursed Child **Spoiler Review**”