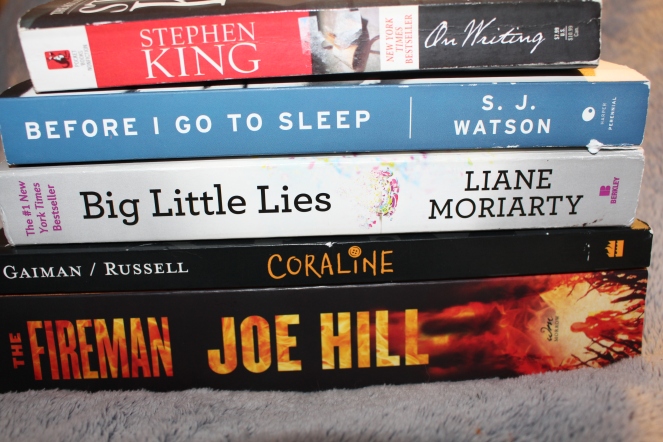 Went to Reads Bookstore tonight with Noah, it’s a tiny used bookstore where you can trade in book’s for 25% off the sale price written on the book and then you get that money back in store credit. Sometimes they have a lot of stuff and other times its slim pickings. They have a small YA section and a large adult section and a very small comic section. So I don’t go very often but was bored tonight so took a walk up.

1.The Fireman by Joe Hill

This is Joe Hill’s newest book. I’m not really sure what it’s about. I read Horns in 2014 and I really enjoyed it. So finding a fairly new book at the small used book store, was worth the price to pick it up.

I’ve seen this book around a lot,again I don’t really know what it’s about. I know its chick lit and I don’t usually pick that up but there’s also a mystery.

3.Before I Go to Sleep by S.J. Watson

A psychological thriller,about a woman called Christine who wakes up every morning with no memory of who she is. It sounds awesome.

4.On Writing: A Memoir of the Craft by Stephen King

I saw this at the shop, and picked it up. I’ve heard good things and that he has good tips. As I tend to get stuck putting my ideas to paper I thought it might be helpful to check out.

Noah picked this one up, lucky for me I will read it also 🙂

To get the the bookstore, we have to walk past a park and there was a band playing music. There was a fair amount of people, so we stopped for a little while and got some pictures 🙂